“How then, shall we lay hold of that life and power, and live the life of prayer without ceasing”
(QFP 2.22 Thomas Kelly 1941) 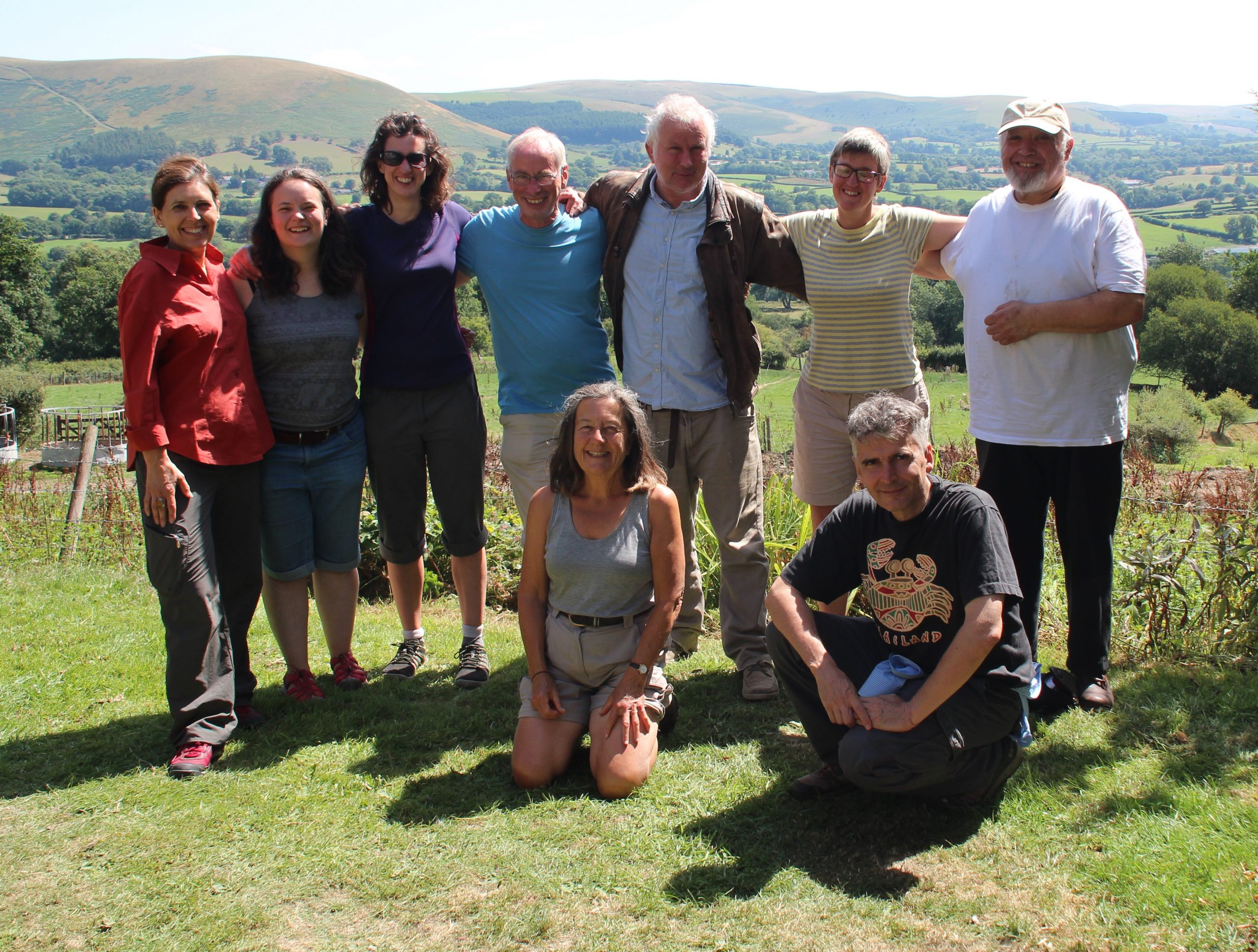 These words were among those which inspired me as I researched the Quaker Voluntary Action theme of prayer ahead of attending a working retreat at The Pales, a remote Quaker meeting house in Mid-Wales. All of life as a prayer; what a simple yet amazing truth to attempt to live by.

Only hours before this I was in a state of mild panic as I hadn’t considered prayer a subject on which I had much to say. I am fairly new to Quakers and briefly forgot that there are usually as many different interpretations as there are Friends and this diversity gives us great freedom and comfort to explore. So, relaxing and being open to the topic led me to find words which spoke ‘to my condition’ and complete my pre-retreat homework. I am grateful to Friends who find words for experiences which are so hard to define. I went on to forget to pack my gardening gloves and sunscreen; a reminder to keep my feet on the ground. 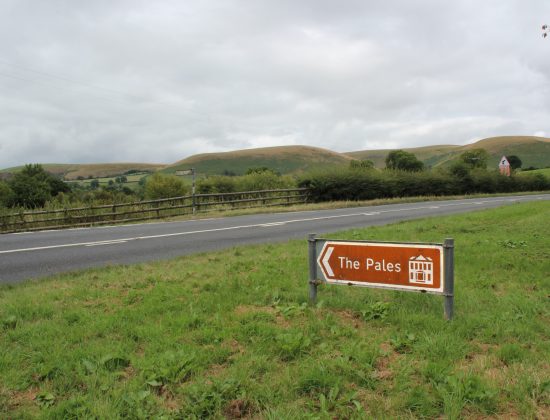 The lane to The Pales is tiny and at various points I wondered if I had taken a wrong turn. Then the buildings appeared, unassuming and easily missed. A little further on was the quarry where we could park. There was one car already there so I wasn’t the first, but a little early so I decided to sit outside with my flask and take in the spectacular view. Another car pulled up and a couple introduced themselves as Claudia and Marco from Bologne in Italy. We went in together and met Hannah and Laura, facilitators, and Carole, Friend in residence, and tea and cake were generously shared. The first thing which struck me was the overwhelming smell of ‘old’ in the meeting house; it is over three centuries old and the oldest Quaker meeting house in continual use in Wales.

Soon Ruth arrived and we quickly became a sociable group. Keith was collected from the railway station at Penybont and we expected two more later. 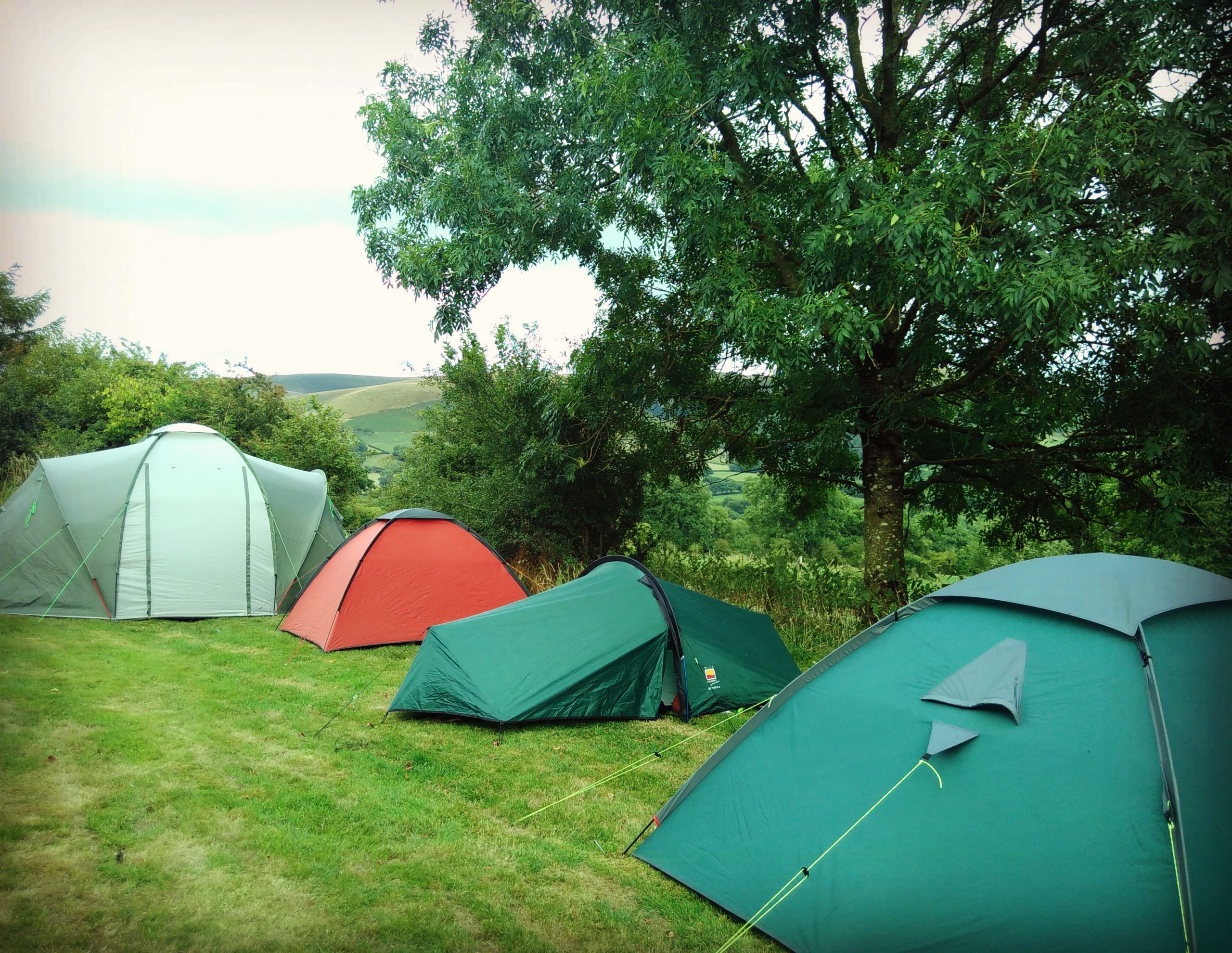 e of us camped and we were fortunate to have a dry day to pitch our tents and acclimatise to the grounds. Carole took us on a tour and explained what needed doing. Nothing looked too daunting, though the enthusiasm cooled somewhat when we looked inside the woodshed! Fortunately, the man with the woodshed plan was yet to arrive. Tony, with his van and array of power tools, tackled this job with relish.

I volunteered, along with Marco, to make dinner. We had a selection of ingredients to work with and a suggested menu. This was a pleasure, although from time to time we did take it in turns to sneak outside to see what the others were doing in the fruit garden – working miracles it would seem; the transformation was impressive. Ripe blackcurrants provided a tasty dessert (those which made it as far as the kitchen!)

Malcolm arrived as we were washing up so we were all present for our first epilogue in the meeting room. Here we met with a special silence and an atmosphere which was comforting and welcoming. “Be still and cool thy own mind”, the words of George Fox from 1658, reminded us in a simple, framed quotation on the wall. We entered the room a collection of individuals and left it a community; the retreat had properly begun. 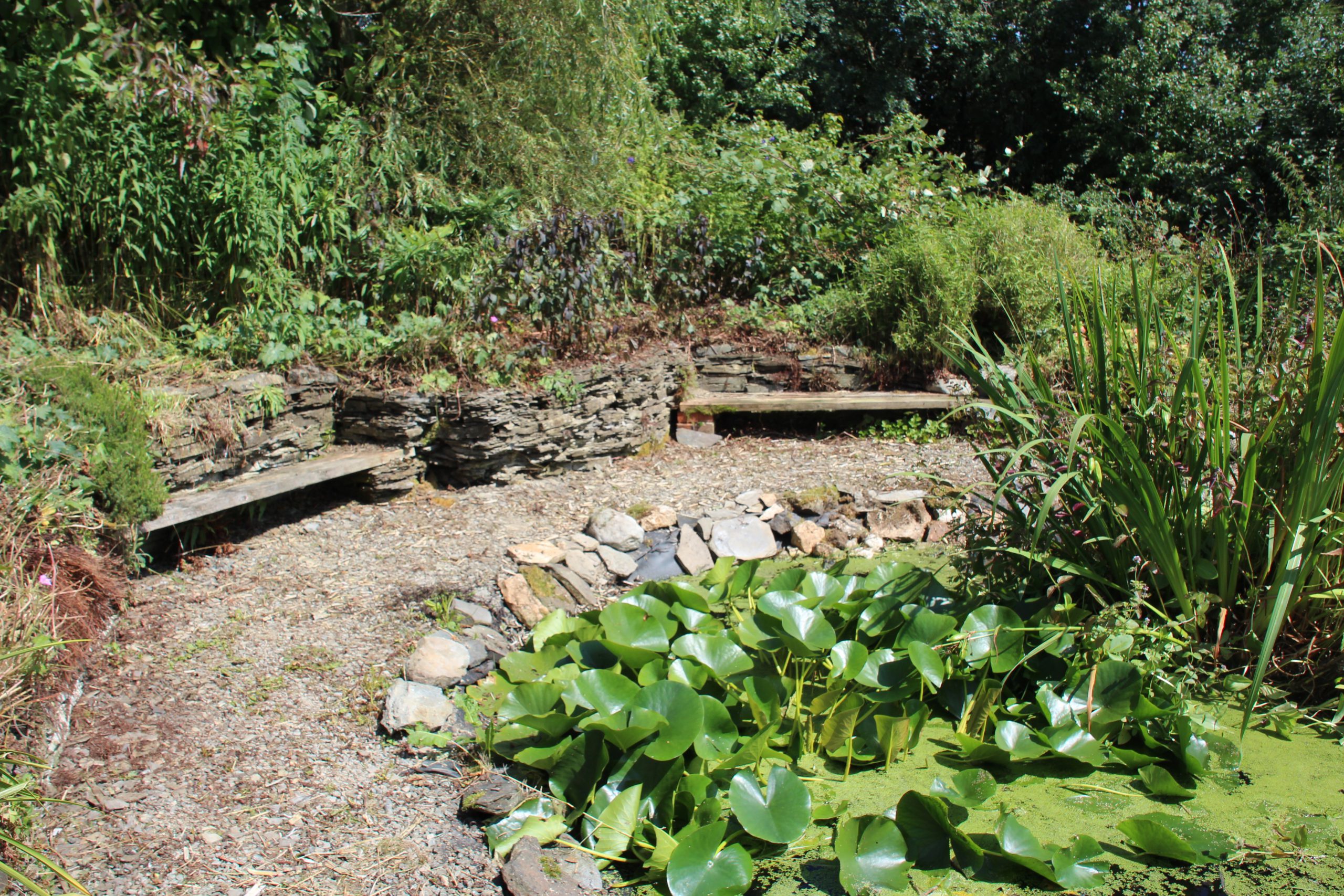 The pond, after we’d cleared the path

Saturday morning we returned to work, spreading out now over various projects; removing plastic tree guards, clearing the pond and surrounds, hedge trimming and did I mention there was a woodshed?! 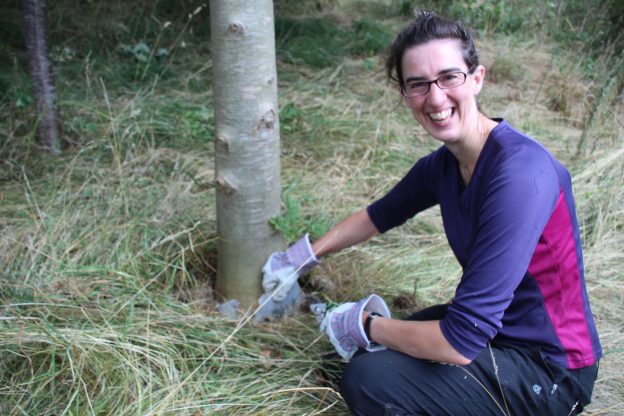 Ruth tackling the plastic around the base of the trees

Each meal was prepared by two of us and by Saturday lunchtime we had worked up a good appetite and, in the heat, quite a thirst. A more relaxed afternoon of free time and a walking prayer session balanced the day well and our pre-dinner work was quieter and a little gentler. After dinner, epilogue was held on the hillside opposite with the setting sun and a gentle breeze.

I opted to cook breakfast on Sunday with Tony. A feast of egg, beans, tomatoes and mushrooms which was well-received. We went on to sing and speak and be silent around the newly revealed pond. There was a joyful accompaniment from some resident frogs. Our worship continued at Llandrindod Wells meeting house where we swelled the numbers considerably. This is a simple, modern, purpose-built meeting house set back from the road and shaded so peaceful and cool.

After a leisurely lunch we gradually resumed work. The pressure had reduced as we had been very productive on Saturday. We begun to see smaller jobs which were concealed behind the larger, more urgent tasks; tidying the vegetable garden, trimming the roses around the door oh, and a little more to do in the woodshed… 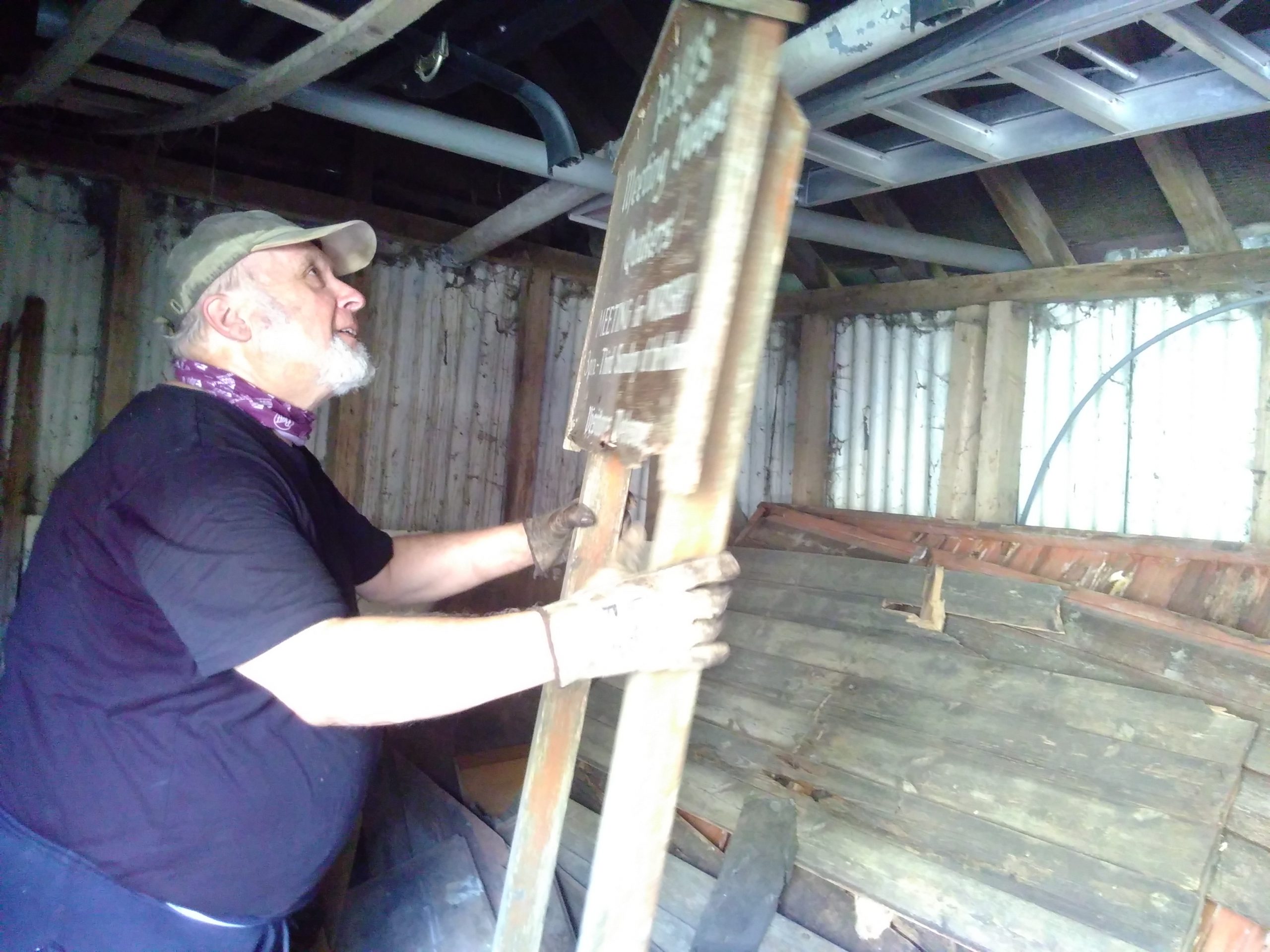 Tony, working in the woodshed

Peter came to tell us of the history of The Pales and of the hopes for the future. All the while firmly rooted in the present.

A very special epilogue among the memories in the burial ground brought this full and fulfilling day to a close.

On Monday I awoke early, a little sad that it was the last day of the retreat, followed by a joy that I could sit in the meeting room alone for a while before breakfast. There was a little finishing off to be done as well as worship and lunch before departing at 2pm. A very special final worship involved walking in George Fox’s footsteps to Penybont common, where, centuries before, many were convinced and became Friends. Radnorshire became the stronghold of Quakers in Wales. As Quakers, we are mindful of equality, of place and time as well as people. Worship on Penybont common was a very spiritual, gathered experience and a fitting close to our little itinerant community in Mid Wales. We shared laughter, tears, chatter and silence, despair and delight, connection. 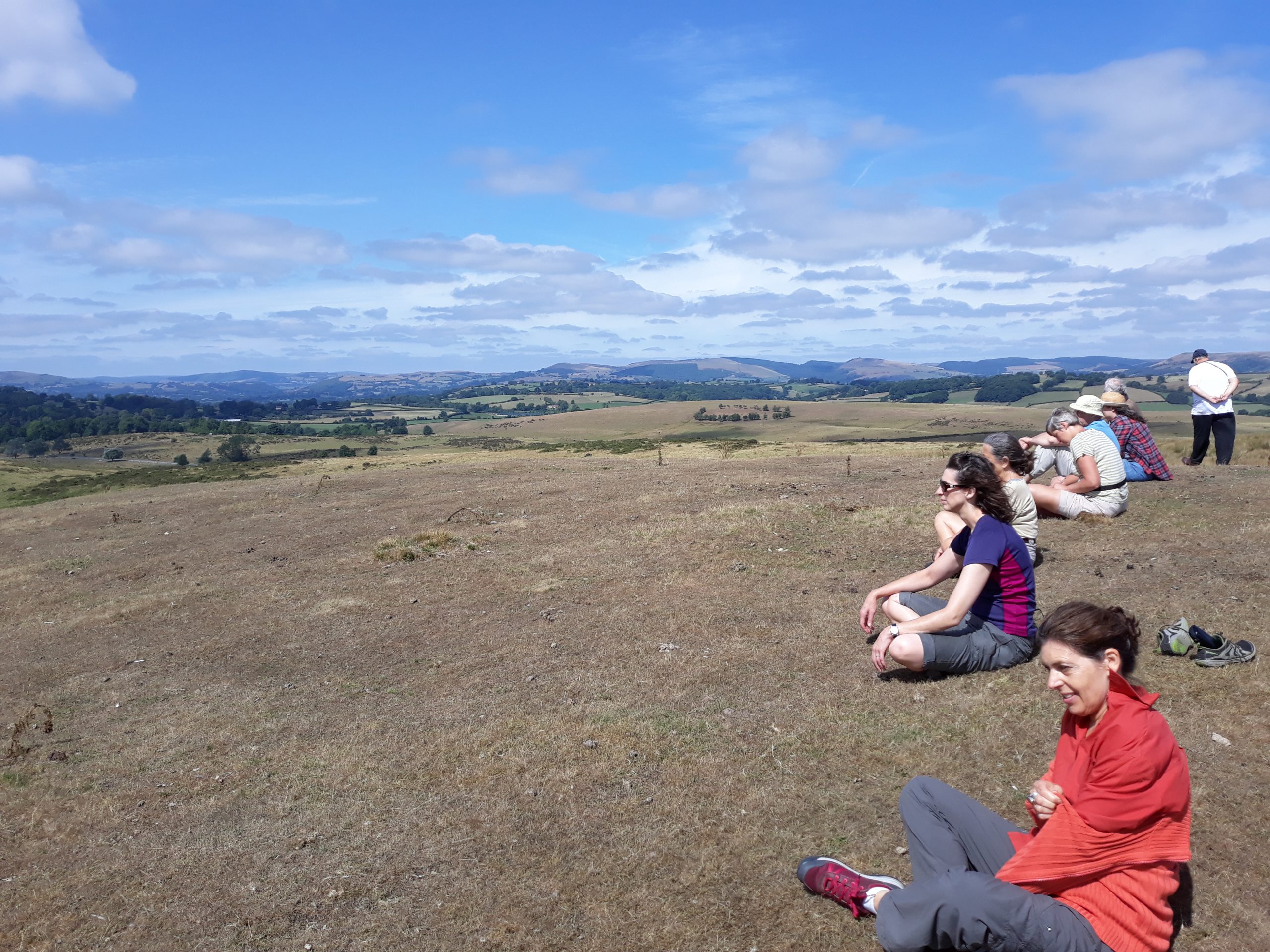 Meeting for Worship on Penybont Common