Picking olives at Ein Ya Broud

Picking olives at Ein Ya Broud

Annie Delahunty shares a reflection on the October 2018 QVA working retreat in Israel-Palestine. 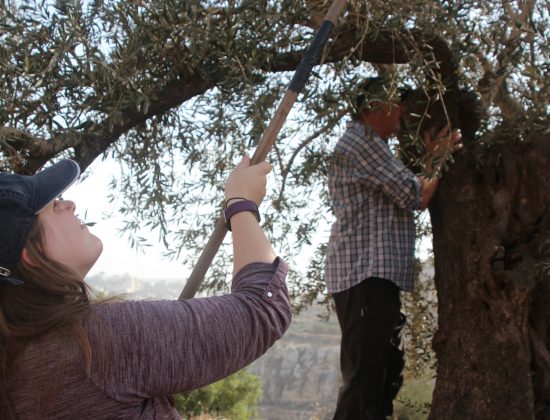 Raking and picking olives from the trees

It was a steep and rocky haul up to the family’s olive tree terraces on the hillside opposite their home village of Ein Ya Broud. I had been relieved to accept a lift in a 4 wheel drive up the final steepest section, though less sure that I had made the right decision as the pick-up proceeded sharply up the stony, rutted track and round theoretically impossible bends. To the evident enjoyment of the experienced driver, who knew these terraces well, and the gasps and arm-clutching of my fellow passengers! So I was already a bit adrift when we finally arrived and were met by a small, strong-looking woman wearing a full black head-scarf and ankle-length tan coverall over her black trousers and trainers. Somewhat incongruously topped off by a royal blue baseball cap. Though, as a veteran (second day) olive picker, I knew how necessary that would be for a day spent gazing upwards through the olive trees. She was dressed for work.

The exciting journey up to the terrace is my excuse, at any rate, for failing to understand what she was telling us.

Finally it dawned on me. Her ‘good neighbours’ were not, of course, helpful friends from Ein Ya Broud, who would in any case be working on their own olive harvest. 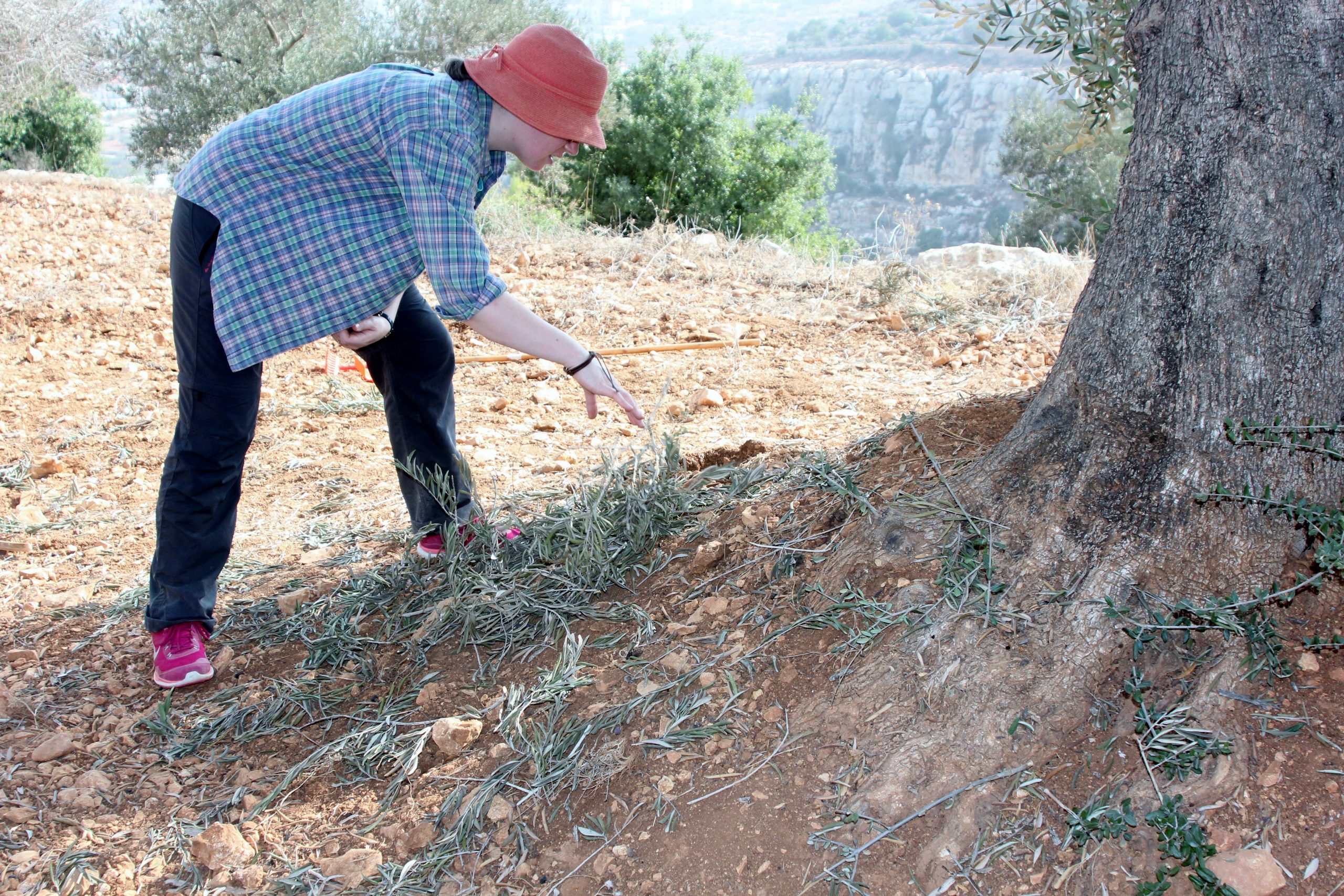 Inspecting the damage to the trees

No. She was referring to their Israeli neighbours living illegally on occupied land. This community on the other side of the hill considered Ein Ya Broud to be a legitimate part of Israel. Flying unashamedly in the face of international law,i the Israeli settlement programme in the Occupied Palestinian Territories of the West Bank continues at ever greater speed. As it does so it fragments the remaining Palestinian land into what will soon look like settlements themselves. As the reality of this all dawned, I could not help but recognise that this was even more serious in the light of the poor olive harvest across Palestine this year. Heavy rains in the spring had come at a critical time.

The most essential non-religious time of the year for the Palestinian people is the olive harvest. Economically vital to Palestinians, as well as providing olives and olive oil for families from their own land. A core link to their centuries of cultivation of these trees, on terraces they have tended, part of their shared calendar of events which links them to their land. A central part of their culture, one of the many things that bind them together. The olive harvest is a time of celebration. And on this occasion, we were there both to help in the harvest and in the celebration.

Miss Mohammed had visited the trees a week before so as to be sure that the olives would be right for picking when we arrived to help. They were. From the damage she saw on her arrival today, and her knowledge of the trees, she could see that her ‘neighbours’ had visited three or four days ago. They had stripped many of the trees. But not all. And not as thoroughly as a farmer who had tended the trees themself would have done.

Our initial task was therefore to locate and gather the remaining few olives on the trees that had been stripped. There were still some, and though few, they were clearly of value and considered significant. No tree was left behind until Miss Mohammed indicated that it was time to move on. The olives were gathered into a series of containers and seemed to be a pitifully small harvest. I was so worried for them. These were beautifully maintained olive trees on terraces which must have been managed for centuries.

I had no idea how much this family, and family is a broader concept, a more extended economic and functional structure than ours often is, might be dependent upon the harvest.

Despite the reduced harvest, all was not lost. We moved on to the trees which had not already been visited by the settlers and set to work. It was a masterclass. The man who drove the more feeble of us up to the trees, and two younger ones, were up ladders, picking from the top of the trees and throwing the olives down onto the tarpaulins stretched out below. We, our eyes now accommodated to spotting olives on branches through dappled sun, brought them safely onto the tarps by a variety of methods. A common one is to gently hit the tree with your wooden stick. Ripe fruit will fall. It was normally more productive to rake the trees, with branch-width orange plastic rakes fitted on the end of broom handles. Looking like children’s toys, they are to be seen all over Palestine and are perfectly designed for the job. They deliver a substantial crop from a well-stocked tree, a series of pleasing ‘plops’ are heard as the olives land on the tarps. The final method is the one we had learned first on the trees whose fruit had been stolen; just look into the tree, with your now more knowledgeable eye. Move your head from side to side and see the olives waiting to be found, but only visible from the correct angle through the branches. Then pick and drop them onto the tarps with the rest of this season’s offering. 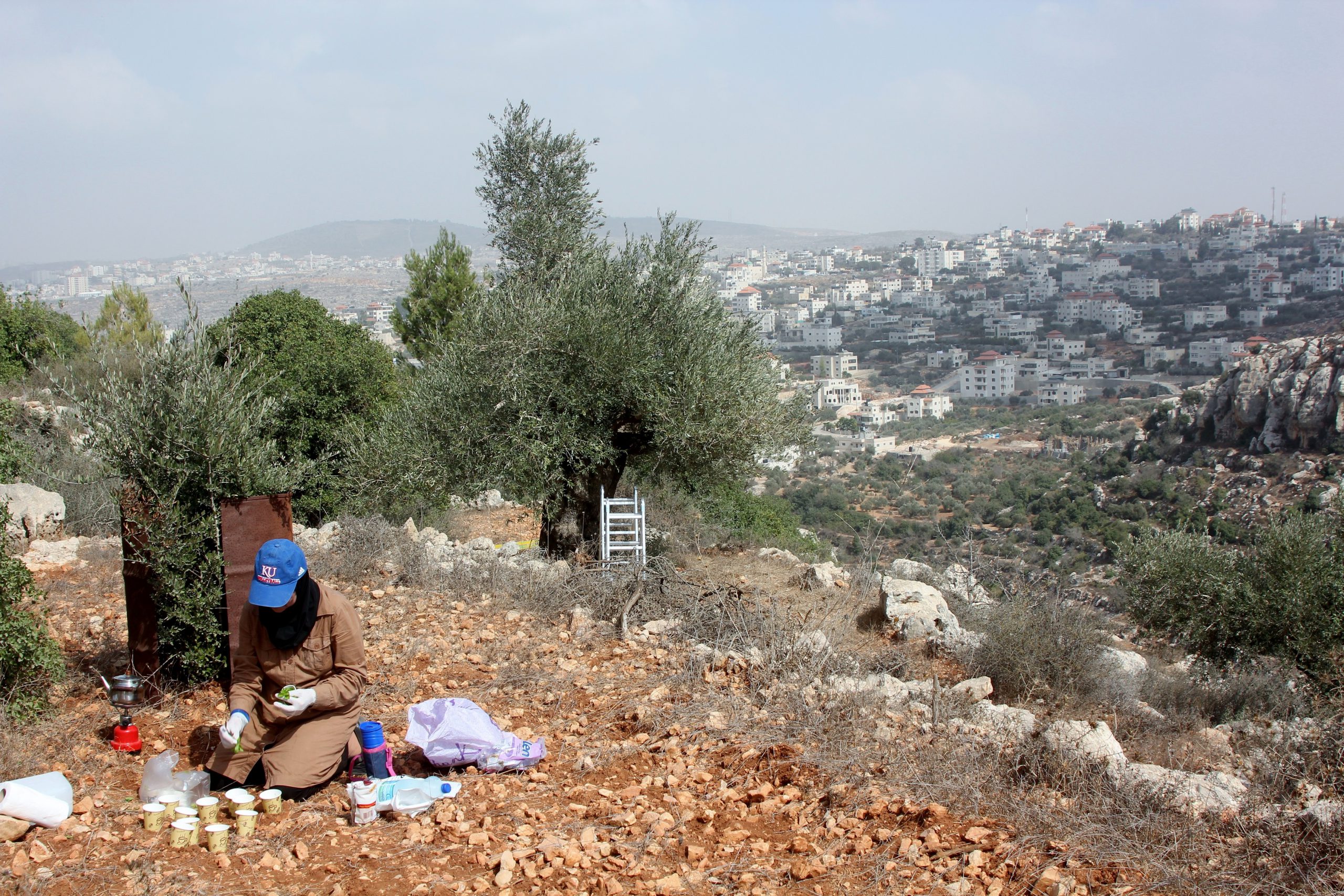 Making for the olive harvest

From time to time Miss Mohammed would set up her Primus stove and make us all very welcome hot drinks. As is always the case in Palestine, they were in tiny cups and perfectly prepared. Our first refreshment was Arabic coffee. Later we had restorative mint tea.

Though it was never a matter of sitting and resting for a chat with your welcome drink. We kept moving on. Nothing was static on these terraces. It was harvest time.

We raked and picked and sorted the olives from the tarpaulins into buckets ready for the sacks that would be delivered to the local olive oil cooperative, where each local family would take their produce to be turned into their most essential and highly valued product; olive oil. 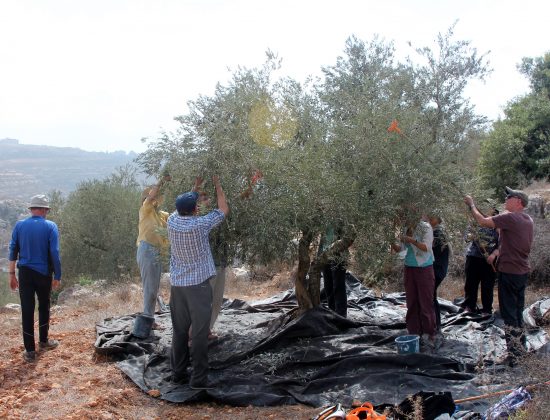 And when eventually our work was done it was time for celebration together.

Down we went to the valley, where the tiniest of streams ran at this time of year. Over old walls and past the ruins of old cottage until finally we arrived where we were to celebrate the harvest under a shady tree. 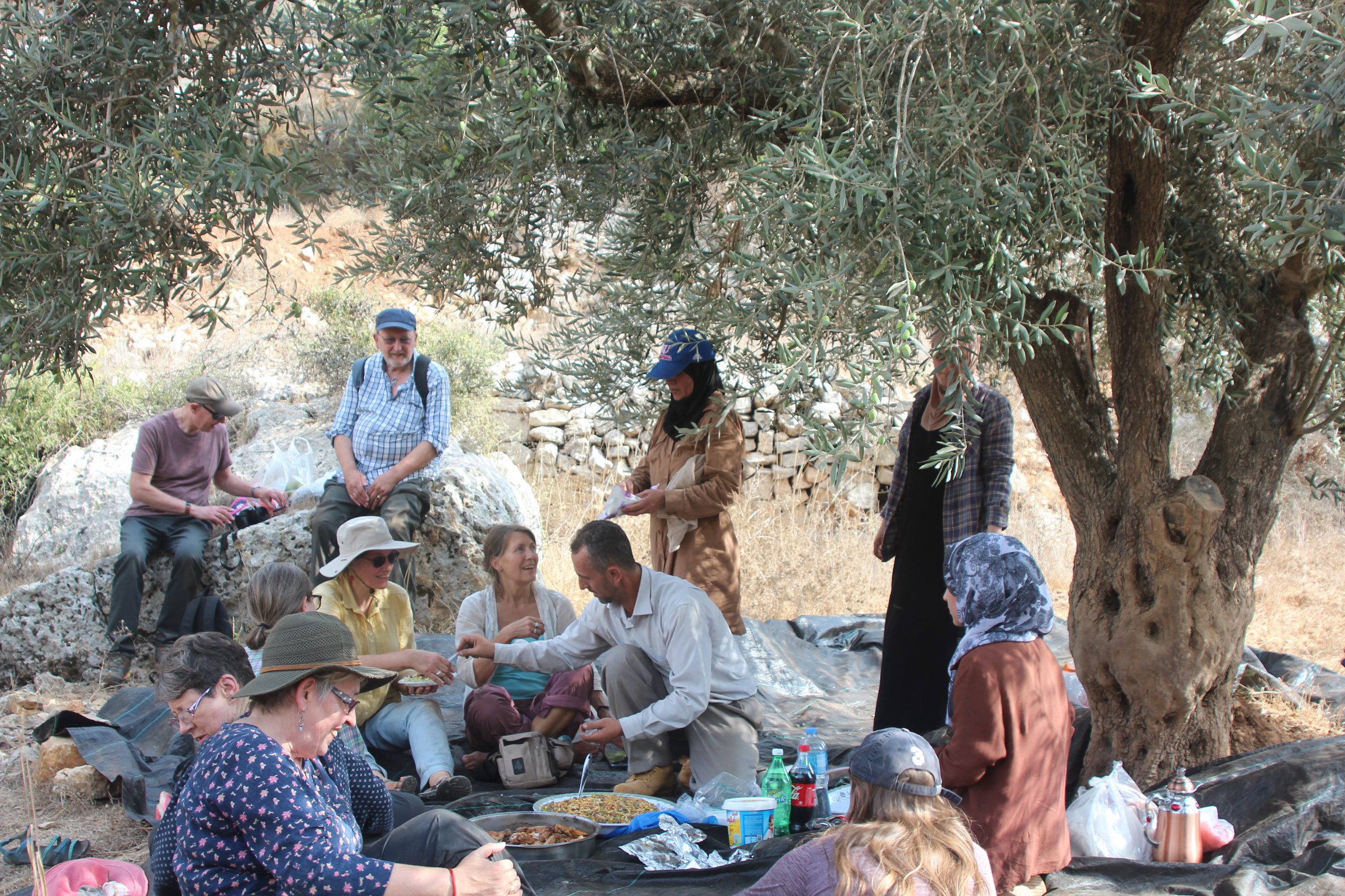 The wider family was gathered there. We were served the most delicious Maqluba, salad, yoghurt, fruit juice and more. I wish I could recall more detail. I just remember feeling so very welcome. So much a part of a significant family event which had brought them and us together in this beautiful, warm and shady place. Enjoying the feast sitting on the ground and hearing cheerful laughter all around us. We were much thanked for our work, though it seemed so little. It had clearly been much appreciated. And already the family was eager to welcome the group back next year.

It was a privilege. Thank you.

We will be returning to Israel-Palestine for a working retreat in 2019. Would you like to join us? Info here.