On witnessing another world just round the corner

On witnessing another world just round the corner

A few weeks ago I went to Calais for a few days to volunteer in the Auberge de Migrants, as a kind of ‘recce’ for the QVA working retreat taking place there in July. It was my first time there, so there was a great deal I was ignorant about (and still am).

As Quakers know all too well, it can be hard to put experiences of the Light into words. So in this piece I’ll just do the best I can. 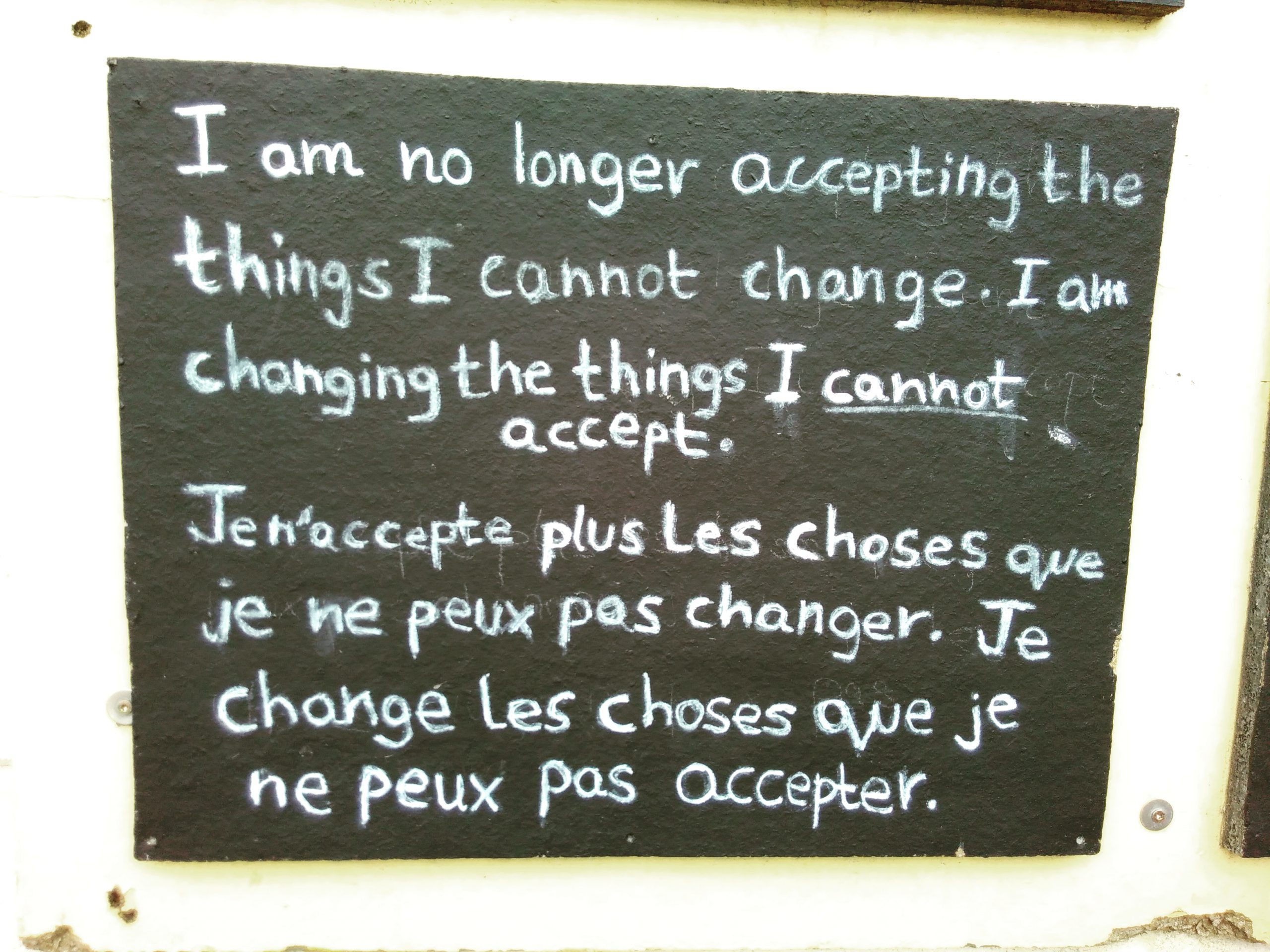 Calais is just a short nap away from English shores. I feel asleep just as we were leaving Dover and woke up what seemed like moments later, approaching France. Making this journey so easily in either direction is a marker of my privilege. People die – regularly – for want of this ease of movement, because their lives, their journeys, have not given them the right to go this way. I have such freedom. My lovely parents are going to Calais next month, too. They’re collecting the wine for my wedding. And suddenly I’m put in mind of one whose first miracle changed water into wine at a wedding in Cana, and whose life was spent eating and hanging out with those his society thought were unclean. Who are unclean by our society’s standards? I wanna be eating with them.

Looking for food on our arrival, we were hard pressed to notice any sign, any evidence of the hundreds of people we knew were destitute in this city. They are on the outskirts: the industrial edges, the forests and the nature reserves. Literally at the margins. (Or are they the thin places?) But maybe it’s naive to think we’d see those who have fled from Syria, or Eritrea, or Iraq, Afghanistan or Sudan walking the streets with the restaurants and casinos and supermarkets. Maybe their invisibility is not at all surprising, when their presence is so heavily controlled by the police, who regularly evict, confiscate and harass. Many do not want to see. Standing in the centre of Sheffield, where I live, or any other British city for that matter, is that the place you’d really see the injustice? Some people sleeping rough – yes. Some people asking for money – for sure. But the poor housing, the food banks, the rape crisis centres closed or the structural racism? For some of these inequalities you need to look a little harder, if indeed you are not one of those that these issues affects.

A few moments to remember 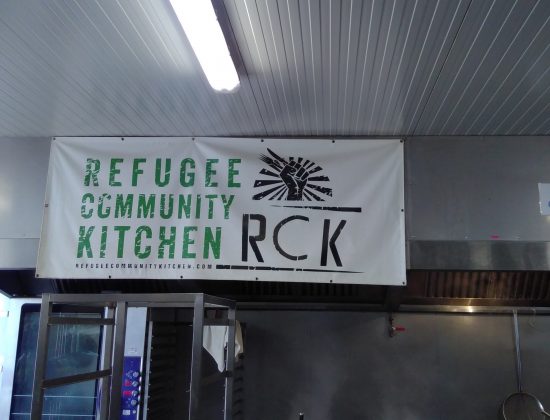 I spent my first day in Calais chopping salad, and later had the chance to distribute the food – an evening meal in Calais and Dunkirk. We were encouraged to give as much choice as possible within the limits of what was available – “Would you like the salad next to the pasta, or on top?” Anything to give those eating a sense that we recognised their dignity, some recognition of their individual preferences. An identity separate from that of every other displaced person we see on our smartphone screens and televisions. I wondered what I – who can’t eat gluten, else I get ill – would do in this situation.

It was cold and rainy. I felt cold down to my boots for hours afterwards – hours which for me included a return trip in a van, a “tea-brief” with other volunteers in the warehouse, a short car journey and then bed in the Calais Youth Hostel. That whole time, the people eating, were they still gathering around fires and inside small tents in the middle of that grassy bit in the industrial estate? I guess so.

The next day I sorted through donations. A wealth of coats, scarves, trousers and the like, given by people from all over who just want to help. Later I chatted to Irfan, a student from the UK, as we hammered the heads of nails that stuck out of bits of pallet (I’ve changed the names in this article). This happens in the woodyard just outside the warehouse. We do it so that the volunteers breaking up the wood with circular saws will not get cut by them, as they fill bags of firewood that will be distributed to those sleeping rough. What do Quakers think of sin, and forgiveness? Irfan asks. What do you think of capital punishment? I believe everyone can change, I said. “Even ISIS?” he said. “Even ISIS.” Later still I chatted to Vasiliki, originally from Cyprus, and we worked out that my pacifist friends from that divided island (or occupied, depending on your view) – site of a conflict largely forgotten by other Europeans – were her friends too.

Working and talking together brings people closer in community. We know that at Quaker Voluntary Action! And it’s true here in the Help Refugees Warehouse, also.

Later that day, after we had finished work, we stood in silence briefly in the centre of town, keeping quiet for a man who had died the day before, his heart failing between pallets in the back of a van heading to the UK. I don’t know his story. I don’t know how it felt to be the truck driver whose brakes caused his end. But I will honour this person, who has died wanting to get into a country that I happened to have been born in. I’d heard about his death the day before, at the food distribution. A man with long hair told each of us handing out plates and cutlery, dishing up – “my friend died today”. What do you say?

‘This is not a migrant crisis,’ it says on the Quaker Peace and Social Witness posters. ‘This is a crisis of inequality, war and climate change.’ These are some of the moral questions of our times. What’s our answer? I’m very grateful for those who have gone before me, those amazing organisations and movements of people who are already answering. We can join in with them in the beautifully organised chaos of civil society organisations resisting the idea that anyone is disposable. 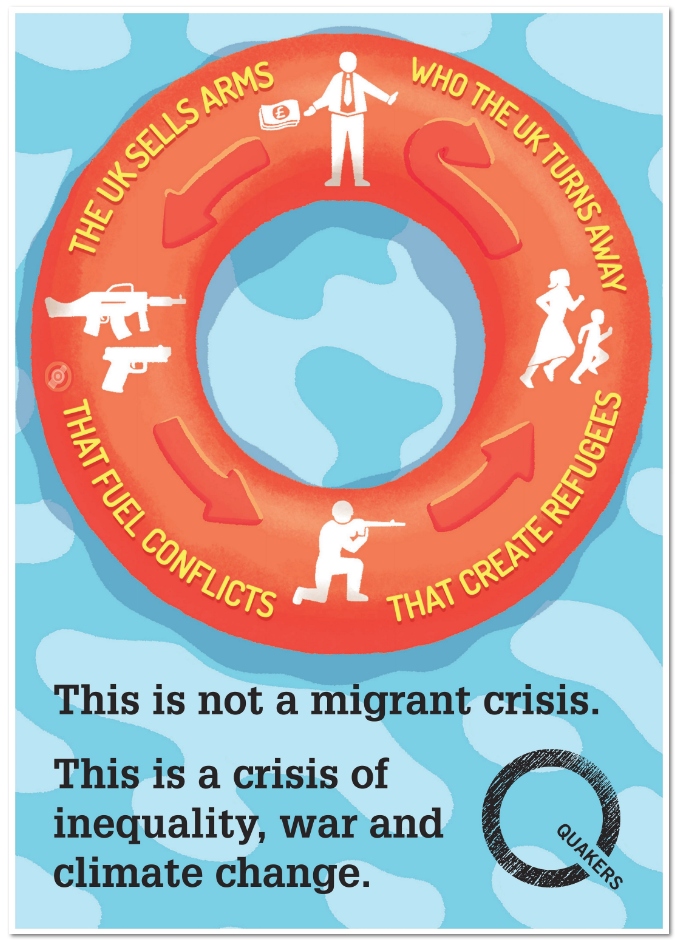 In July when we come as a working retreat group, we will take time in the evenings for reflection, pondering our QVA theme for the year – God in the movement of peoples. Where is God in all this? I saw her in the anger of the person who had lost his friend. This is an outrage, yes, goodness knows, this is an outrage. I saw her in the faces of the volunteers chopping vegetables, seemingly endlessly, in the Refugee Community Kitchen. They shall not starve. I saw her in the arrival of the men, people of colour, people who’ve come far, people who have slept through the winter in tents, as they smiled briefly and shook hands on seeing the circle of 100+ people – those who had the privilege of being born in France or England, Belgium or America, who have the right papers, the right social security benefits. We joined them in gathering to remember someone who had died, hidden in a truck. We were not equal, around that circle. The world has given us different advantages, journeys, struggles. But we were united in this moment of remembering.

Spots for the July working retreat are filling up fast, but we’re likely to run the trip again. Sign up to our mailing list to hear about future opportunities. It may in some ways be a gruelling trip, but I am sure that it will also be necessary, sobering, and a way to share Light.

If you can’t join our working retreats in Calais, there are lots of other ways you can get involved. You can go volunteer on your own – they’re always on the lookout for helping hands! Or check out the ‘Calais needs list’ for things the Help Refugees warehouse is most short of. Connect with the Sanctuary Meetings initiative, or get involved in local networks working against the hostile environment, like local No Borders groups or Right to Remain.