In July a group of eleven QVA volunteers went to Calais to volunteer in the Help Refugees Warehouse. Here are two accounts of our time there, thanks to Jane Smith and Marie-José Wouters.

Life on a Knife Edge

Jane Smith
I am standing on the beach in Calais looking towards the White Cliffs of Dover. There are at least five different ways I can get to England if I have a British passport. Those without the necessary papers do sometimes get there, and others die in the effort. The tremendous  danger can only be measured against the desperate hope to escape conflict. 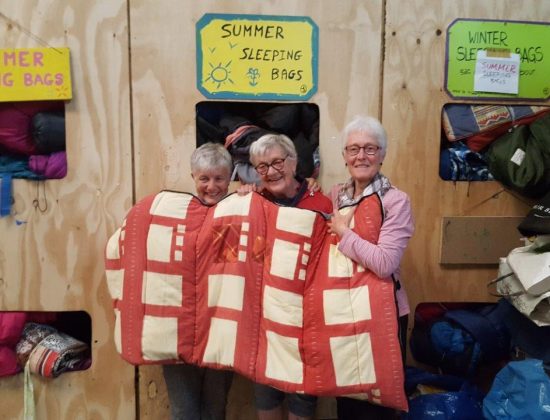 The Ware House in Calais provides for refugees who are trying to move on to more friendly countries. It is extremely well organised, clean and creating useful items and services for the refugees. It’s a whirlwind of activity with many different sections:- cooking, sorting, categorising, mending, cleaning,  medical services, toy making, items for special need children and so many more. There is always a wonderful atmosphere of people working together while they enjoy each others company.

The biggest question I  was left with was:’’ ‘Why should we need to have a refugee camp at all?’ The reasons for people having to leave their homes, families, work, culture, and countries is caused by conflict, pressure of being forced to join a different religion or  ethnic group and being forced to live in hostile countries which are cruel or  unacceptable.

The trauma of being uprooted to walking across Europe or Africa and many other countries for two years,  to arrive in Calais, having paid a large some of money to the traffickers , only to wait another two years to leave, or find that they can’t leave; seems completely ridiculous and inhumane.  The camps at both Calais and Dunkirk, which constantly receive a bad press and media coverage in Britain , could easily be terminated   by eliminating  the above difficulties.

It seems that society has such a strong vested interest in blaming those who have been punished by societies behaviour. Britain is complicit in selling arms thus creating a spiral of refugees and necessitating camps where the refugees  end up.

There is no Refugee crisis.  There is an equality crisis, a war crisis and a climate change crisis. 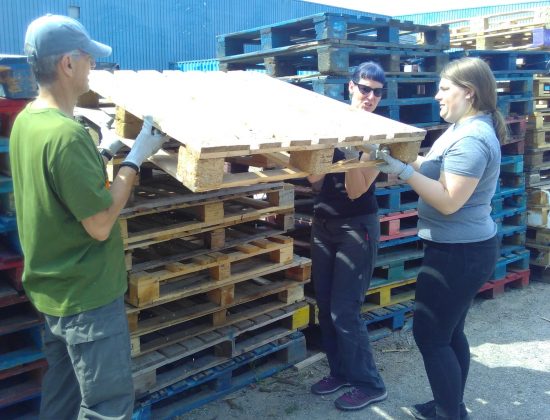 We are a little unaccustomed to each other: ten British Quakers and me (a Dutch one). From the youth hostel in Calais we travelled by bus to the Refugee Warehouse. A huge hall with a huge kitchen and huge mass of goods. First we get a tour: store your backpack here (otherwise it will be taken on the large pile of goods that can be distributed); here is the shoe department, children’s clothes, tent check area, sewing department, toys, hygiene corner (soap, sanitary napkins, diapers). I start in the kitchen: with two others we are peeling three large boxes of garlic all morning. A lot is needed for around 500 meals that are cooked here every day. Just before lunch I can lay jeans to size and after lunch I pitted kilos of apricots. The cook wants to make a kind of muesli cakes. The apricots were old and shrivelled, but a night of soaking made them nice. I remember that those of us who work in the sewing corner can make seed bags and wash the seeds (quite a job). They dry in the sun.

The next day we already arrive as “experienced” volunteers. I start again in the kitchen: now I peel and cut carrots all morning. Boxes full!. After that I can sort children’s clothes and after lunch I make a seed bag.

On the last morning a volunteer asks three of us whether we would like to clean a house. It is a house where those who need extra rest are awarded a bed. There were bed bugs that were treated with poison. But then everyone has to leave the house and in this case it was a pregnant woman with her child. She also had broken her leg. They could move her somewhere else and it is now a good opportunity to make a good cleaning of the house. One brings us by car. There are 16 beds in the house: sometimes 35 people are sleeping here, mostly men. We divide the tasks: I start in the attic: vacuuming all cracks. Then I spend a good deal of time cleaning the bathroom. Groups of men are sometimes allowed to have shower there, so you can imagine that with such intensive use, something can be cleaned. This is how the day goes: cleaning a bedroom, having lunch together, vacuuming another wooden floor, washing up children’s toys, etc. Others also do rooms, select clothes, make beds; a woman is washing all day (everything at 60 ); I unclog a drain. Then we walk back to the youth hostel. Another well-spent day, and three very different days on which a lot of work has been done!