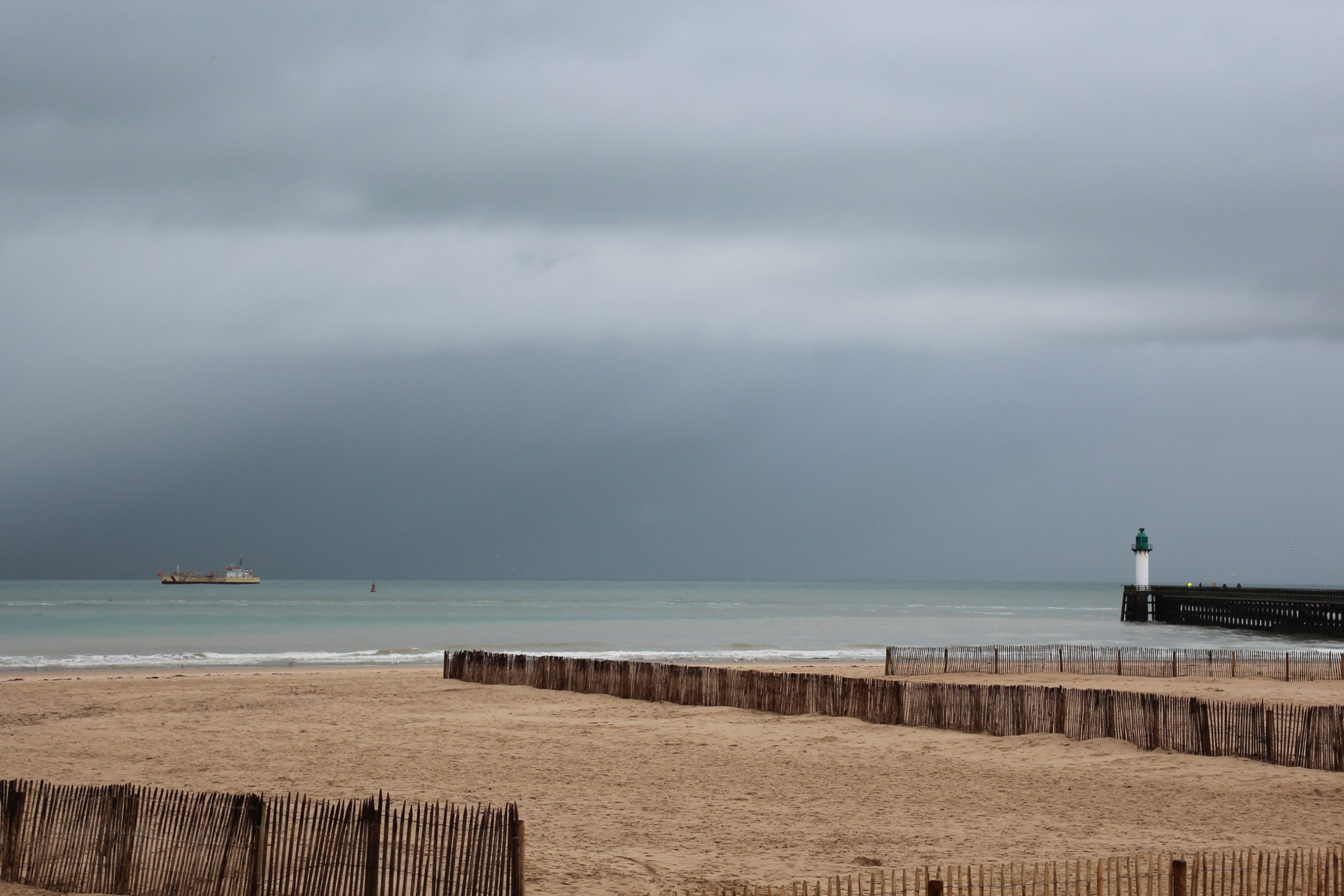 In early November Debby Flack and I from our area meeting joined a group of UK Friends on a Quaker Voluntary Action working retreat. Our Quaker witness was to help prepare meals for refugees in the Calais and Dunkirk area. The base was a big warehouse managed by Community Refugee Kitchen (RCK), supported by long- and short-term volunteers. We stayed at Calais Youth Hostel and travelled by local bus to our place of work, a cavernous warehouse on the outskirts of town.

I am left with two most memorable experiences, one that relates to three days of washing, peeling and chopping huge quantities of vegetables, the other special experience was serving some 600 meals to Kurdish refugees on a cold and wet open camp site next to a motorway.

Within an hour of arrival at the Community Kitchen we joined teams of volunteers from the UK, France and other places to help prepare a hot meal each day for some 1200 refugees in the Calais area. We spontaneously mingled in small groups around tables loaded with boxes of a potatoes, carrots, parsnips, onions, garlic, ginger and herbs waiting to be chopped ready for cooking. Within a short period of time the anonymous warehouse became a hive of shared activity and friendly chatter, we became good neighbours uplifted by a buzz of human warmth and friendliness. A small group of regular volunteers organise this amazing well-run enterprise on a shoestring budget and adjust daily to shifting numbers of refugees and volunteers. They guided us newcomers with patience and smiles. The Warehouse Kitchen felt like a place of equality and loving kindness and respectful interaction with volunteers and refugees. 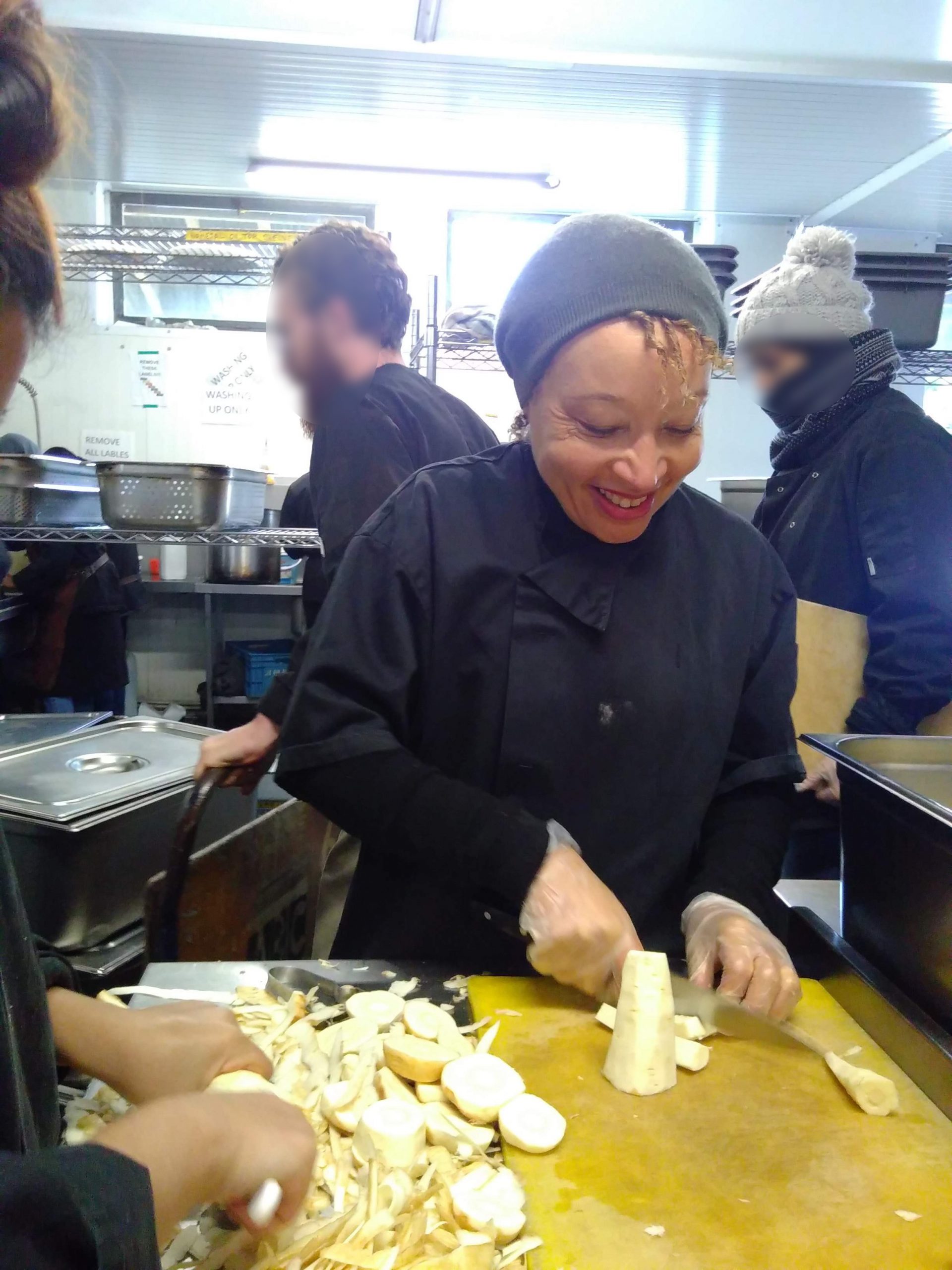 On our last day Debby and I volunteered to join the food distribution team for the Dunkirk camp. While helping to prepare meals in the warehouse kitchen we felt in solidarity with the refugees, although at some distance, going out to the camp and serving food meant coming face to face with individual persons. During the introduction for the retreat Hannah, our facilitator, helped us focus on why we had come, in part ‘to make the invisible visible’.

Before leaving in a van filled with containers of food and water for tea, our small team of five sat in a circle outdoors for an introduction on practicalities. We were also gently reminded on how to greet and show respect for each person coming to be served food.

As we approached the site on a dirt track next to a motorway, young men came out of the wooded area of their campsite to follow the van. We were expected, and we were on time. Within five minutes after arrival we had set up trestle tables in the open with food containers and serving spoons in place. A queue of men was already waiting to be served food. Rose, our senior volunteer greeted each person while handing out a plate. During the next two hours our little team served some 600 hot meals, a vegetable curry with rice, a fresh salad, bread, a cup of tea and banana cake. Given the length of the queue there were only brief moments for eye contact, for ‘hello’ and ‘welcome’ greetings or for small gestures offering a choice for more food or where to serve the salad in relation to the hot food. Rose had helped us to see that having agency and being offered a choice is a rare experience for a refugee. Everyone in the queue had been offered one meal and could return for a second helping. A last minute availability for more cake brought smiles and happy faces to a group of young men, they had been hovering around for a while hoping for another helping of banana cake.

By now it was dark and Rose’s clear message to us was ‘let’s go’. I saw men in small groups slowly walking away into the dark, cold and wet night towards their improvised ‘campsite’. Some were standing next to a small fire for warmth and companionship. The back door of the van was already shut, when one, then two, then three men approached and each one handed out small chocolate bars to each of us. It was a very moving to receive such a generous gift from people whose everyday life was shaped by deprivation and insecurity. At this place and this moment, the invisible was made visible to us by three refugees: that of God in everyone, a light
shining in the darkness.