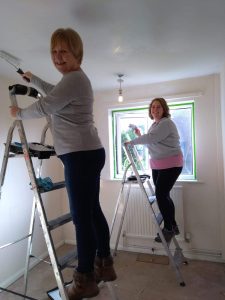 Over a long weekend in February, QVA volunteers helped redecorate four bedrooms of a house belonging to ASSIST Sheffield which will be used in the near future by asylum seekers who would otherwise be destitute.

We worked together for four days, with some folk joining for the whole event and others just for a day. Most of the volunteers were from Sheffield, but a few came from as far afield as Barnsley, Leeds and Didsbury!

As well as working hard, over the weekend we took time in the afternoons to reflect on the theme ‘God in the movement of peoples’.We reflected on our own experiences of moving, where the Spirit was at work in this, and who had helped us along the way. We also held in the Light those people who will be moving into the house over the next few months. Thanks everyone for your amazing work painting, wallpapering, gardening, contributing to our reflections and community building together.